Join free community
Check my eligibility
Our next 2 cohorts are full.
Get started
Full programme signup
Chat with health team
Get early access to the Habitual program
Thank you for joining the waitlist 🙂
Oops! Something went wrong while submitting the form. 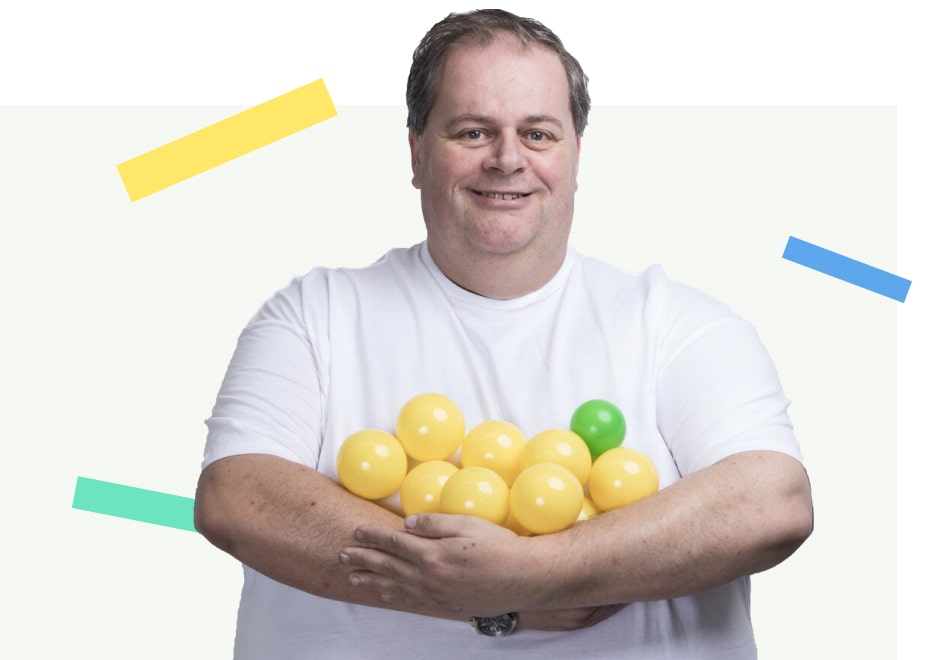 “Each yellow ball represents 1kg lost in my first month!”

My name is Gary Pearson, and I’m one of the first people lucky enough to try out the Habitual program. I know it can be a daunting journey to start on, so I wanted to share my experiences as I go through it, in hopes that it will help to inspire, motivate, and help others to change their lives for the better.

I have been on the Habitual program for 6 weeks now, and in that time I have lost just over 11kg—or as i prefer to tell people, 24lbs, as it sounds a more impressive amount 😀 This is nearly 2 stone, and an average of 4lbs per week. You’ll notice I’m holding yellow balls in the photo—that’s a visual representation of how many kilos I’d lost after just 4 weeks!

Before starting on this journey, I was a type 2 diabetic on 3 different medications, 5 tablets a day, and an unpleasant daily injection. I also had high blood pressure and cholesterol which I took additional tablets for. When I started on Total Diet Replacement (TDR), I stopped all of my medication, which was initially a bit daunting. However, after speaking to my GP and my Diabetes Doctor, I was reassured and excited to learn that a TDR diet is one of the best ways to possibly reverse diabetes. I had initially wanted to partake in the program to lose weight and better my quality of life, but the health benefits I learned about were very compelling as well: Let’s face it, nobody wants to be pumping down pills and having injections every day for the rest of their lives if there is an alternative that can realistically be achieved.

I’ve also experienced all of the social stigmas associated with being overweight. Doctors tell me I’m a “living time bomb” due to my weight, my daughter feels awkward around her friends when they meet her ‘fat’ Dad, and people have on many occasions called me ‘fat’. It was about time for people to start appreciating me for my many qualities beyond what you see at first glance.

I’ve been unable to work for the past year due to frequent hospital and doctor visits [due to an operation I had that didn't go well], so I saw Habitual as a chance to change my life for the better whilst I was going through an enforced change. I just got a feeling that this program could be different: when I spoke on the phone to Dr. Braithwaite, one of Habitual’s cofounders, I was especially intrigued that he kept on about the daily support provided, which I had never experienced before.

When I first signed up to Habitual I wasn't really sure what it would be like. I’ve tried various diets over the years, all claiming to make me a new slimmer, happier, fitter person... but they have all disappointed as I either lose interest or there is just no support, help, or explanation as to what I should be doing and how to truly change my habits.

Before starting TDR, I was a little apprehensive as to how it would be, but also excited at the prospect of starting to make changes in my life. The day before starting, I had a great big fry up for breakfast and a large meal with my family in the evening: To me, this was like having a big blow out before my life was about to take a different course. It may sound stupid, but in my mind it was like saying goodbye to bad habits.

I had told my family all about what I was about to embark on and they were all very supportive. I know my parents worry about me and the strain my weight puts on my heart, as does my wife. She sweetly ‘loves me the way I am,’ which I don’t doubt for a second, but I also know that realistically she would be happier to have a slimmer, fitter me that lives a longer life alongside her.

I won’t lie, the first few days on TDR were very hard. You go from eating whatever you want, when you want, to suddenly having 800 calories per day. It’s a shock to the system, but my view was (and still is!) to take each day as it comes.

I quickly realised how much of our lives revolve around food. The weekends have been the hardest bit, as we tend to eat meals as a family on Saturday and Sunday nights—but I wanted life to carry on as normal, which meant accepting that I’d have to get used to people eating around me. I experienced some of the expected side effects (like being cold, having a minor headache, and some trouble sleeping), most of which soon resolved. I also experienced some weird cravings, like for an apple (not my normal).

When I started on TDR, I tried out a few different flavours, however the shakes were the only ones I really enjoyed. I’m six weeks in and only eating 3 flavours of shakes, four times a day, and I really enjoy them! Many people worry about the limited choice when you’re on TDR—and sure, nobody would choose to do TDR for fun—but for me it’s well worth the short-term sacrifice to make a big change in my life.

The side effects have been more than worth it for the weight loss and how proud I am of how far I’ve come. My clothes started feeling looser by day four, and by the end of week one I had lost 8 lbs! having the constant positive reinforcement of constantly seeing the scales go down is incredibly motivating.

I did have a few slip-ups (due to hunger-inducing tablets I had to take for an unrelated medical issue), and I initially felt really guilty afterwards—but because of the support and guidance I’ve received, I was able to reframe my negativity. This meant that I was straight back to TDR the following day, avoiding any negative downward spirals.

Rather than resenting my reasons for being on the diet and letting it get me down (even when times are tough), I see every day on TDR as a bonus and a step towards reaching my goals. Every time I get on the scales and see that my weight has gone down, I feel proud of my achievements so far—and I’m looking forward to many more. Someone recently told me “every pound you lose is really two pounds, as you put one on in the first place:” to me, that is very true.

After 6 weeks I am still totally impressed by the support and resources from Habitual. The daily exercises help me uncover insights about what’s gone wrong in the past and how to make lasting changes to my relationship with food. When I’ve had medical questions, the team has been responsive within minutes. I get feedback on my daily tracking, and sometimes even unexpected texts simply asking how I’m getting on, which is so different from other programs I’ve tried in the past. Anyone can replace their food with shakes and soups to lose weight, but it's the personal touch that makes Habitual different.

I’m only on week 6 of the rest of my life, but I’ll be back with more as things progress!